In a new round of tariffs that began last week, Chinese imports targeted by the U.S. include:

Trump's own tariffs make it harder to rebuild infrastructure

By David A. Lieb, Associated Press

President Donald Trump wants to rebuild the nation's transportation infrastructure. He also wants to strengthen the U.S. steel industry through tariffs on imports.

But that second goal could make it more costly to accomplish the first.

Since Trump announced the tariffs in March, prices have been rising for the American steel used to build bridges, reinforce concrete highways and lay the rails for mass transit systems. Though many of this summer's big construction projects had locked in pre-tariff prices, concerns are mounting among contractors and some transportation officials that the tariffs could raise costs and delay work that is still in the planning stages.

"The president seems to be at loggerheads with two conflicting priorities of his administration," said Brian Turmail, vice president of public affairs and strategic initiatives at the Associated General Contractors of America. "He's making it very difficult for construction firms and people who build infrastructure to be successful, at least in the short term."

In Kansas City, for example, voters recently approved higher sales and property taxes to fund a streetcar extension that had been estimated to cost at least $250 million. Though the project had been in the works for a year, officials are now recalculating.

"We are anticipating our prices to increase because of the tariffs," said Donna Mandelbaum, communications director for the Kansas City Streetcar Authority.

Trump in February announced a $1.5 trillion infrastructure plan that would use $200 billion in federal funds to leverage state, local and private-sector investment. The proposal had yet to gain traction in Congress when the president announced tariffs of 25 percent on steel and 10 percent on aluminum imported from most countries. After a temporary exemption, the metal tariffs hit the U.S. allies of Canada, Mexico and the European Union on May 31.

Most federally funded transportation projects in the U.S. already are required by law to use U.S. steel. Tariffs are like taxes charged only on imported products. But because they make foreign steel more expensive, tariffs also allow U.S. steel producers to raise prices without being undercut by international competitors.

The price of U.S. hot-rolled coil steel, a bellwether product for the industry, is up about 40 percent since the start of this year due to a combination of Trump's tariffs and strong economic demand, said Joe Innace, the metals content director in the Americas at S&P Global Platts.

Prices also have been rising for specific transportation-related products, such as fabricated metal for bridges.

Read the full article, including the impacts on projects in Missouri, California, Pennsylvania, and Rhode Island.

Trump’s trade war has started. Who’s been helped and who’s been hurt?

Administration officials say the import taxes are very small compared with the country’s $18 trillion economy and that they will boost domestic manufacturing and investment. Trump has urged patience as the trade war continues to escalate. But what are the impacts of the tariffs that have already gone into effect?

In March and June, the Trump administration significantly expanded its protectionist campaign and imposed tariffs of 25 percent on steel and 10 percent on aluminum, which together account for about $48 billion in imports. The tariffs, justified by an administration finding that the imports threatened national security, exempt only South Korea, Brazil, Argentina and Australia. Steel and aluminum prices jumped. 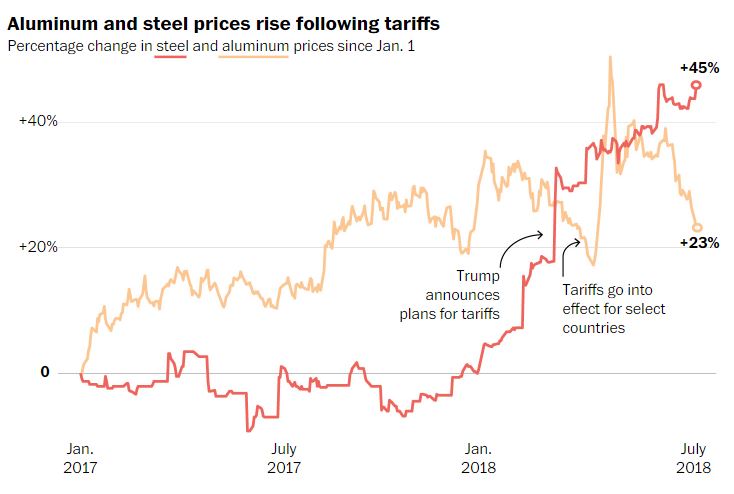 Although steel and aluminum producers supported the tariffs overall, some expressed qualms about the tariff's expansive reach. The Aluminum Association said in a statement that it was disappointed the tariff was extended beyond countries like China to “additional vital trading partner countries.” And the Steel Manufacturers Association supported exceptions for key allies such as Mexico and Canada.

With the tariffs, jobs in industries that make steel and aluminum jobs are projected to grow by more than 25,000 in the next three years, according to a study by Trade Partnership Worldwide. Companies have announced expansions. Dormant mills, such as the one in Mingo Junction, Ohio, are on the path to reopening.

But the same Trade Partnership report estimates that 16 U.S. jobs will be lost for every steel- or aluminum-producing job gained, totaling over 400,000 net lost jobs.

One factor for the projected loss is that there are 5.1 million jobs in manufacturing industries that stand to be hurt by higher steel and aluminum prices, according to a Brookings Institution analysis of Emsi data. That compares to 313,000 jobs in the industries that make the metals and will benefit from higher prices.

Higher steel and aluminum prices also could ripple across the economy, in higher costs for commercial construction, the building of roads and bridges, as well as for a wide variety of consumer products. Add to those the estimated impact of retaliation from U.S. trading partners, and the overall cost to the country’s economy the steel and aluminum tariffs will be $37 billion, according to the Trade Partnership. 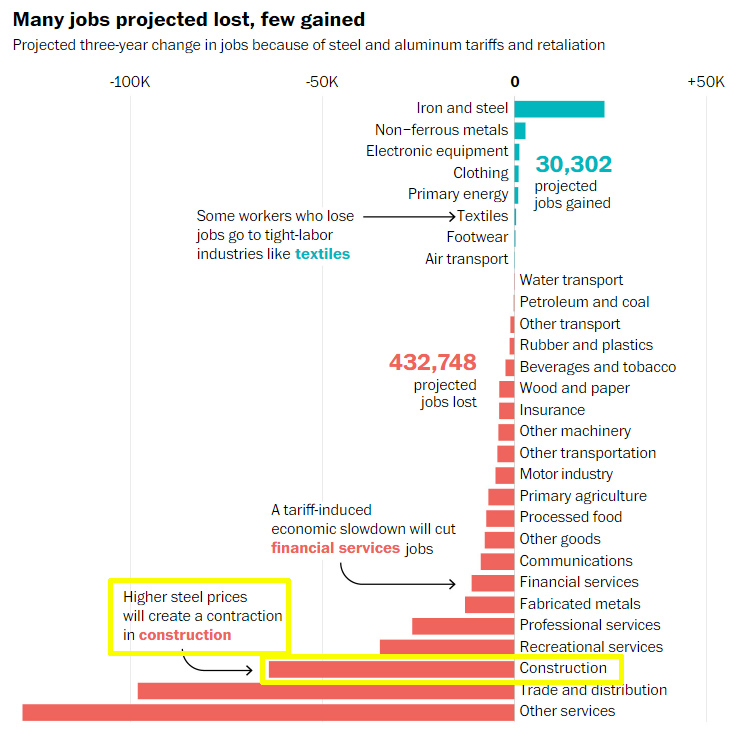 Read the full article, including the impact on other targeted industries.

Association of Equipment Manufacturers (AEM) President Dennis Slater issued the following statement expressing disappointment with the Trump Administration’s decision to move forward with the majority of $50 billion in tariffs on imported goods from China:

“AEM and its 1,000 member companies are extremely disappointed with the Trump administration’s decision to move forward with the majority of the $50 billion in proposed tariffs. These tariffs target the vital parts and components used in equipment manufacturing throughout the U.S. They will also drive up the cost of manufacturing in the U.S. and risk many of the 1.3 million good-paying manufacturing jobs our industry supports. Combining this with China’s promise to retaliate against U.S. products and agricultural commodities only further erodes the benefits of last year’s tax reform, hurting the entire U.S. economy. While the President is right to address China’s intellectual property theft and unfair trade policies, taxing American citizens won’t fix the problem.”

China and Russia hit back at Trump tariffs

China's commerce ministry said it had lodged a new complaint with the World Trade Organization (WTO). Meanwhile, Russia has announced extra duties on US imports in retaliation for earlier US steel tariffs. Beijing has accused the US of starting the "largest trade war in economic history".

US tariffs on $34bn (£25.7bn) of Chinese goods came into effect on Friday. China retaliated by imposing a similar 25% tariff on 545 US products - including cars, soya beans and lobsters - also worth a total of $34bn. Russia is introducing extra duties on a range of products imported from the US that can be replaced by locally made equivalents. They include road-building equipment, products for the oil and gas industry, and tools used in mining.

Mr Trump has already imposed tariffs on imported washing machines and solar panels, and started charging levies on the imports of steel and aluminium from the European Union, Mexico and Canada.

The US tariffs imposed so far would affect the equivalent of 0.6% of global trade and account for 0.1% of global GDP, according to Morgan Stanley.